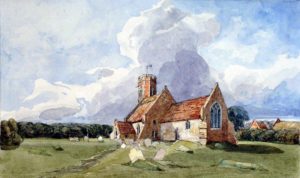 St Peter’s Church, Brampton sits on a prominent position at the north-east end of the village. It overlooks an arc of the River Bure as it crosses into the neighbouring parish of Burgh-Next-Aylsham. 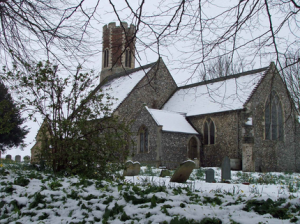 Brief architectural description of the Church:

The round tower dates back to late Norman times (1066-1088) and was enhanced in the  1480’s to 1520’s by the addition of a brick belfry of octagonal form.  If you look closely
at this section you can make out some decoration with a criss-cross pattern of blue bricks amongst the reddish-brown ones.

The round tower has it’s flat side against the nave, this indicates that the nave was built first. The thickness of tower walls seems to indicate that the tower may have Saxon origins. Only after the Norman Conquest did cut stone from local quarries become readily available and them it needed to be transported by water.

The tower is in line with the chancel indicating that the original church was long and narrow – perhaps there was limited supply of timber of good length in the locality.

The four belfry windows have plain and simple “Y” shaped tracery [and flat four centred arches] In the Norman part of the tower spot the use of brown conglomerate stone as well as flint. Conglomerate is relatively uncommon around here. If you look closely, you may also be able to spot some reclaimed Roman tiles in the masonry. As usual not much goes to waste.  Just around to the north west corner of the nave are some roughly dressed stone blocks dating from the original Norman part of the church.

This website uses cookies to improve your experience while you navigate through the website. Out of these, the cookies that are categorized as necessary are stored on your browser as they are essential for the working of basic functionalities of the website. We also use third-party cookies that help us analyze and understand how you use this website. These cookies will be stored in your browser only with your consent. You also have the option to opt-out of these cookies. But opting out of some of these cookies may affect your browsing experience.
Necessary Always Enabled
Necessary cookies are absolutely essential for the website to function properly. This category only includes cookies that ensures basic functionalities and security features of the website. These cookies do not store any personal information.
Non-necessary
Any cookies that may not be particularly necessary for the website to function and is used specifically to collect user personal data via analytics, ads, other embedded contents are termed as non-necessary cookies. It is mandatory to procure user consent prior to running these cookies on your website.
SAVE & ACCEPT