This website is for the village of Brampton in Norfolk. The village is linked through the Parish Council with the neighbouring historic hamlet of Oxnead.

Brampton is one of the smallest villages in Norfolk and is almost certainly the smallest of all the places with the same name throughout the world. The village is located in the valley of the River Bure some 2.5 miles from the market town of Aylsham.

The village sign (above) gives a clue to the fact that the village has a rich history. Archaeological finds go back to the neolithic era but much dates from Roman times when the site was a bustling industrial centre with maritime links to the rest of the empire. Pottery and metal products were the main items manufactured here. The village sign is based on a Roman artefact discovered in the village which can now be seen in Norwich Castle Museum. Excavations in the 1960’s & 70’s uncovered a Roman bath house and much evidence of industrial activity. It also identified the location of the port area from where the manufactured items were exported.

The River Bure was navigable through Brampton until 1912 when wherries (Norfolk cargo carrying river boats) would transit to the mill at Aylsham. Brampton itself had a staithe (landing place) and at least one wherry was based here. Today the head of navigation is Coltishall from where the Bure forms an important part of the Broads network as it wends its way to Great Yarmouth.

Today the village is unspoilt and very quiet. Visitors on foot, bike or horseback are very welcome but our narrow lanes and lack of parking makes a visit by car very difficult. There is a station at Brampton on the Bure Valley Railway; a footpath and cycle way runs alongside.

There are a number of footpaths in and around Brampton. One of the favourites is the causeway path (known as the ‘Karnser’) that leads to Burgh-next-Aylsham. This route crosses the Bure by way of the Cradle Bridge and then crosses the churchyard of St. Mary’s Church in Burgh.

St. Peter’s Church Brampton lies at the north of the village at the end of a shallow ridge which overlooks the river valley.  The church is one of the 124 ‘round-tower’ churches of Norfolk and is Grade II* Listed Building.

Brampton wildlife: Finches in the snow

As I write, I can look up to see a garden full of finches. The visiting flock of Bramblings, which varies in number from a dozen to a score of birds, has been a daily site, along with the regular Goldfinches, Greenfinches and Chaffinches. The snow is dirty and on the verge of a thaw. The various feeders of Niger and sunflower seed, peanuts and a wheat based mix have become a hub for the hard-pressed bird population. Outside the garden two neighbouring farms have established almost twenty acres of winter bird food crops and these have harboured large flocks of Linnet and Yellowhammers; their flocks often of 40-80 strong, perhaps more. If ever I wanted to demonstrate the value of supplementary feeding, this is the place and the time. 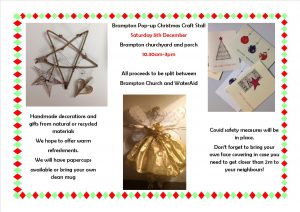 Thank you to all who gave to the Brampton Carol singers during their tour of the village on Christmas Eve. With you help they raised £150 + Gift Aid and this was donated to the Salvation Army;

Lieut-Colonel Dean Pallant, in his note of thanks stated that –

With the help of the support you have given us, we can turn aching loneliness into the joy of company and friendship for forgotten older people. We can ease the constant anxiety of grinding poverty and help give a family a meal on the table and presents, smiles and laughter for their children. Someone who is homeless can find warmth and the assurance of our support to help them move onwards.

Romans in Norfolk – a talk at Brampton Church

Thank you to Katy Edmonds for drawing our attention to the 2019 Broadland Community at Heart Awards.  The award for Good Neighbour or Friend of the Year was presented to Sheila Sayer. A Brampton resident for nearly 40 years, Sheila is the ‘go to’ person in the village. From collecting parcels, to feeding pets, and even lighting one elderly resident’s the fire every morning to make sure she stays warm, nothing is too much trouble for her.

Well done Sheila, with grateful thanks for all of your efforts. It is great to know that your good works have been officially recognized.  We all wish you the very best for the future.

The annual Brampton Litter Pick has become such an established event within the village calendar that we have started to treat it as the ‘first sign of spring’. Although, as I write this   on the next day, Sunday, in which one can almost ‘bask’ in spring sunshine, the slightly duller Saturday weather still favoured all those who gave a voluntary hour to the task.

It is sad fact that we still need to do this every year in order to maintain the beauty of our surroundings, but it gives us all an excuse (not that an excuse is really needed) to get together for collective task.

‘It is like that we are clearing up after a few serial litter louts. The theme is generally the same. Lager cans of a particular brand, containers for a well-know fast food supplier, dog poo bags left hanging in the hedges (As if that was considered as “clearing up”).

Anyway, job done. Thanks to everyone who participated. The parish looks ready for the warmer weather.

The frosts of mid to late January have changed the habits of the parish wildlife.  The most marked change being the flocking of the birds. The Woodpigeons gather into gangs, but most noticeable of all are the large flocks of finches. The finch flocks – consisting mainly of Chaffinchs, Greenfinches, Bramblings, Goldfinches and Linnets – gravitate to the fields planted for this very purpose at the south end of the village. The farm’s conservation scheme, ‘Wild Bird Cover’, consists of a special mix of seed-bearing plants, and it is working. On a fine clear Saturday morning I counted 60 in one flock perched atop the hedgerow trees whilst another, half as big, wheeled round above.   A good example of successful farm-based conservation.

Frosty clear nights echo with the calls of courting foxes. One evening this week a dog fox called as it ran done the village street making all the dogs jump from their slumber.

The Brampton Carol Singers raised £160 during their tour of the village on Christmas Eve. Thanks to all who participated and to those who donated to their collection this year.  The money which they raised  has been sent to the Salvation Army to support their work with the homeless.

Boxing Day morning seemed quiet. The whole village appeared to having a lie-in. On days like these the rest of the parish’s residents – at least the wildlife ones – carry on with business as usual. As I walked past the allotments arrowheads of duck and purposeful pigeons travelled in opposite directions. Finches settled in the tops of the sycamore along the edge of the ‘wild bird food’ crops on the old shoreline. Then, I swear I felt the rush of air as a hawk overtook me on the village street. A male sparrowhawk appeared from over my shoulder, dropped to a few inches above the road surface and flew intent and fast along the lane. Intent, no doubt, upon ambushing a finch.

The hedgerow berries, such as Hawthorn,  have been bountiful this year. But The winter thrushes, the Redwings and Fieldfares, wait until the sharpest frosts of December have passed before they feed upon them. This morning, the 16th December, was the key date for this year’s feast. Numerous scattered flocks roll and flutter from bush to bush ahead of us as we walk along the old railway line. Their calls, a strange mixed chorus of the Fieldfares’ ‘chock-chook’ calls and their Redwings’ weaker ‘seeep’, surround us during their frenzy of feeding.

‘The next week, the Hawthorns are stripped. All but the outermost berries  have been taken.

Posted in Brampton Blog | Tagged Brampton wildlife, Brampton Winter, Migration, winter visitors | Comments Off on Brampton winter: Fieldfares & Redwings
This website uses cookies to improve your experience. We'll assume you're ok with this, but you can opt-out if you wish.Accept Read More
Privacy & Cookies Policy