Fall of a giant 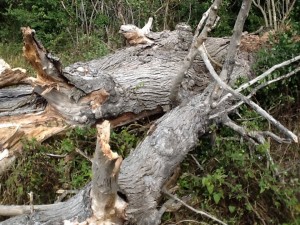 A giant fell this morning. The skeletal carcass of the last English Elm to have reached maturity in the village has been brought crashing to ground. It had far outlasted its contemporaries – many of which were felled when the Dutch Elm Disease struck in the 1970’s – but now decay had finally so-weakened the stem that it was unlikely to remain standing for a further winter. So, at ten minutes to ten on a Sunday morning, following a short chainsaw cut and a haul on a tractor winch, the old tree cracked and came to earth. What was left of its crown, which once touched up to 100 feet in height, split in to many pieces on impact. Tell tale star-like shadows of fungal growth showed through where the viable bark had spilt away. These are the marks of its death and decay. The stump looks as weak as cork. There is a gap in the skyline. Some ten years ago tree surgeons had taken cuttings from its then fully leaved crown in the hope that it was disease resistant. But the cuttings came to nothing and the disease took hold. Now this is its epitaph.

It’s young relations, mostly clones of the parent, still sporadically grow as hedge plants for a few years until the Dutch Elm gets to them. No Elm in the parish reached maturity in recent years. The bare branches remain in hedge lines for a few years until they are tidied away or trimmed back. The Elm is no longer a feature in the local landscape. Although it held on for longer than most in the area.