So far a dry and mild Autumn in the village has meant that most of the trees have retained their leaves. The Field Maple leaves started to turn yellow in mid October but most have yet to fall. The Poplars, which never do things by halves, have dropped all but a few isolated leaves and as a result Keeper’s Wood has taken on it’s Winter profile.

I hear the weak call of the Redwing, but as yet have not actually spotted any of the Winter visiting thrushes. A Common Sandpiper has joined the resident Egret at the Mill Pool. The Kingfisher can still be heard but the many young raised during this bountiful year have mostly dispersed. The occasional Cormornt passes through and I hope that it has a taste for Signal Crayfish rather than for our already depleted Bure fish stocks.

The Roe Deer have gathered into small family groups. Their coats taking on their tawny Autumn colour, rather than that glowing orange-red of Summer, as they prepare for the colder season. The Muntjac galumph about in pairs – seemingly without fear they focus on the gardens and the allotment.

A fine October day for the Brampton Harvest Thanksgiving. The service was followed by a church fundraiser, a Harvest Lunch at the Old Rectory Brampton, which was kindly hosted by William and Jenny Youngs. A gathering of over sixty people enjoyed a lunch based upon the abundant produce from the fields, fruit trees and hedgerows of Brampton and Norfolk helping to raise £1,000 for church funds. One of those small glories that is part of village life in the community. 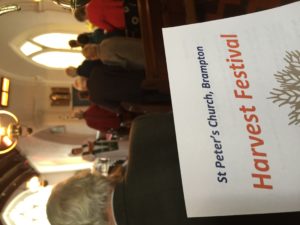 A quick reminder that the Harvest Service for Brampton is tomorrow (Sunday) at 12.30pm. A service of traditional hymns to celebrate the end of harvest.

Any food donations for the FOODBANK would be welcome and will be gathered during the Service.

The River Bure which winds its way around Burgh and Brampton is becoming increasingly overgrown with a non native species of plant (weed) by the name of Himalayan Balsam.

Himalayan Balsam is a relative of the Busy Lizzie and was introduced into the UK in 1839. It can grow to between 6ft and 10ft and produces clusters of pink flowers between June and October. Flowering is followed by seed pods that eventually ‘explode’ and can send seeds flying over a 20 ft radius. The plants remain viable for up to 2 years and are now naturalised on our riverbanks and has become a huge problem in Norfolk.

An introductory talk by Katy Owen, the Project Manager of the Norfolk Non Native Species Initiative, will take place in the Reading Room on Tuesday 20th June 2017 at 7.30pm followed by tea/coffee and biscuits.

The next step is hoped to be the Burgh and Brampton Balsam Pick which is provisionally set for Sunday, 2nd July 2017 at 10.00am, meeting in Burgh Churchyard. But this date is subject to confirmation.

Brampton Spring: the (long awaited) return of the Cuckoo

This year the Cuckoo was a late arrival in the valley. We can usually expect to hear their first call in late April, but not this year. Bill heard the first call yesterday morning (25th May) and I did not hear mine until 6.30 this morning (26th). The call was high and clear, sailing above the chorus of warblers and blackbirds that we are, thankfully, used to.

As the Cuckoo is such a wily and observant species, not given to wasting energy – or so I like to assume – then the species upon which is parasitises (the egg host) must be just into full egg laying. Perhaps the Sedge Warblers along the Bure. Certainly not the garden Dunnocks who seem to have been hard at work for a month or so already. We are unlikely to find out for certain. All we can say is the the Cuckoo is back from West Africa – Sumer is incumen in..

Chilly and overcast weather conditions in early May seemed to delay the return of the Brampton Swifts. Elsewhere, mostly in southern England reports came in of the arrival of the Summer visitor, but it was not until the 10th May that the familiar sight and sound of Swifts returned to the village. Since then the warmer evenings have had the added excitement of a screaming, roller-coaster-ing flight of a dozen or more Swifts dashing above the rooftops.

The sad fact is that, with each year and each house improvement their nest site choices are diminishing. We need a nest box building project.

The sight of Roe Deer has become increasingly common in Brampton in recent years (see link to other posts within the Village blog), but they always feel like an encounter with a wilder, slightly separate world. Usually, the sighting it at some distance and commonly it is for a fleeting moment before the deer melt into the safety of woodland. However, the other evening the encounter was closer. It was all the more surprising because, as we walked along with the Whippets, conversation was in full flow – not the whispers and hand signals that so often have to accompany a deer stalk. The wind was in our favour, blowing from the deer to us – otherwise they would have sensed us, a hundred yards further back. But on this occasion it was an eye to eye meeting, as can be appreciated by the resultant photo. 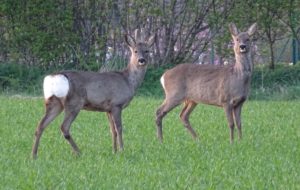 As promised, the rain cleared just in time for the annual Tidy Up on Saturday. A dozen volunteers combed the highways and byways of the parish in order to gather the rubbish dumped by the careless. Seven bags full of beer cans, bottles, fast food boxes and others detritus resulted from an hours work. Thank you to everyone who contributed theie time. 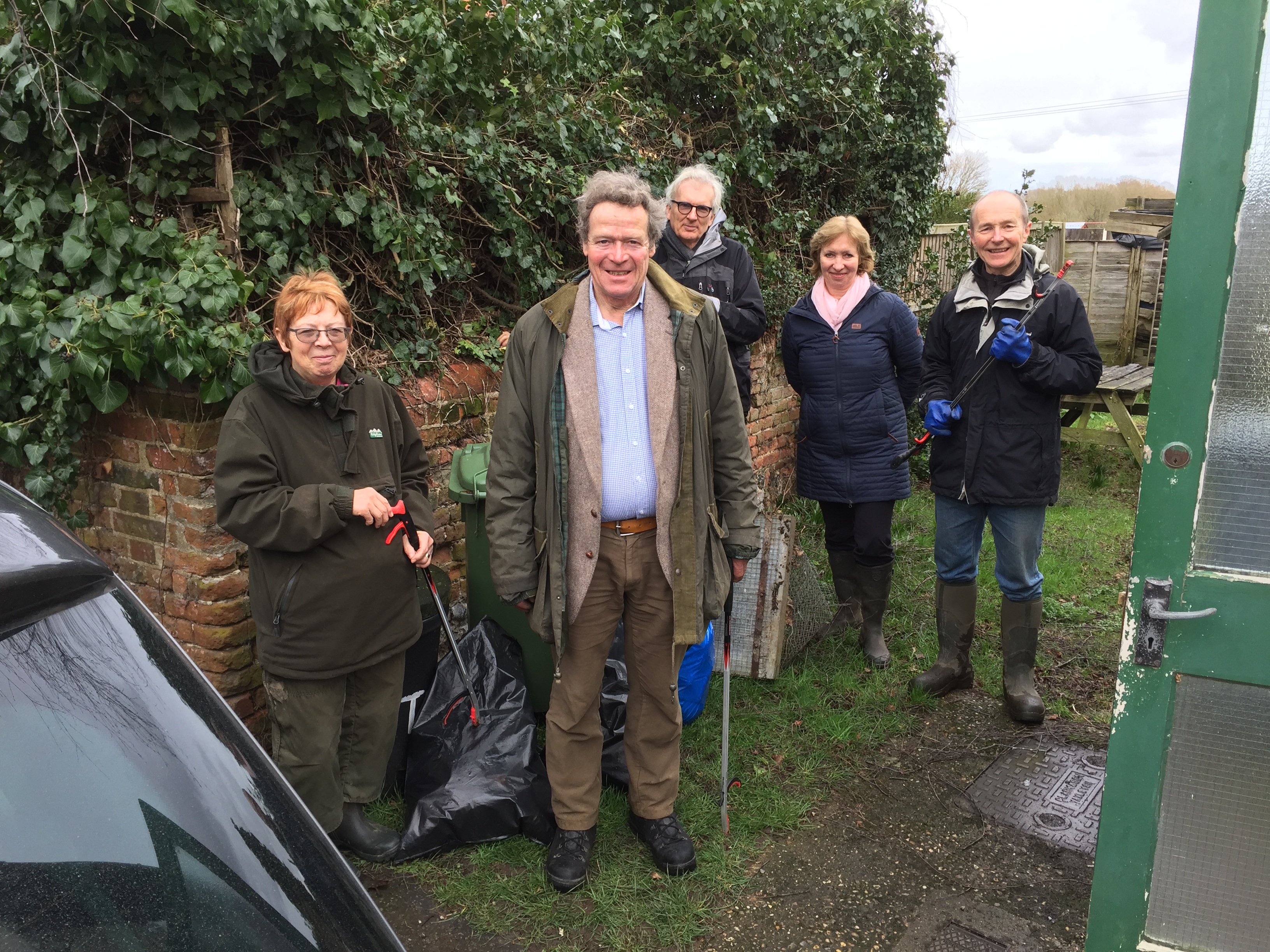 The funeral service for Stuart Wilson will be held at St Faith’s Crematorium at 13.15 on Monday 20th March 2017.