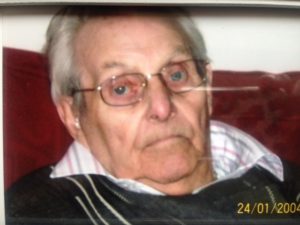 William Spinks in his later years – photo supplied by the family

WILLIAM SPINKS (known to some as Willy and others as Billy) was  born in the Old Maids Head pub in Brampton near where the village sign now is on 27th July 1929 and died in hospital on 14th September 2016 having lived in the same village yards from the place of his birth all his life.

His trade was as a Carpenter and was apprenticed at J.W. Palmer in Aylsham. He also worked for Norgate Brothers in Horstead. He finished his employed years with what became the Property Services Agency based at RAF Coltishall, a job that he retained from 1960 until 1992 when he retired. Although almost to the end he could often be seen working on this and that and keeping himself occupied.

He was married to Eileen in 1962 at Hellesdon as that was where she lived. Apart from his National Service William lived all his life in Brampton which is where their family was brought up and he developed a love for Village history which is shared and carried on by his son Jonathon.

William served on the Parish Council in Brampton (with a couple of short gaps) between the early 1950’s and 2013. I cannot confirm it exactly but this must be something of a record, especially locally.  He also spent 20 years fund raising for and building the Village Hall.

His National Service was served in the Royal Engineers where he mostly used his trade to good effect. Due to a national emergency (Eileen thinks Korea) his time was extended although he never served overseas, in fact, he did not got any further than Wales. It appears that a good part of the extended service was spent completing the Colonel’s conservatory.

The fact is that Brampton has lost a very special son who loved the village and gave much to it over the years. As we have seen he was a very long serving member of the Council with a special interest in the Village Hall that he devoted a lot of time to. His influence will remain for all to see for years to come, the Community Field which he also lobbied for and the Village Hall are two examples but by no means are they the only ones. Even well after leaving the Council and up to the end his thoughts were for the village. Even in the last months of his life he was lobbying for a new road sign on Marsham Road which was put in place whilst he was still with us and stands as a final testament.

There was a “can do” attitude to Willy that that those who knew him were privileged to witness often. The Council might discuss and debate little bits of damage and repairs needed here and there. Whilst we talked, Willy got his tools out and repaired the things the rest of us could only talk about.

William’s funeral will be held at 11:00 on 29/09/2016 at Brampton Church with a reception afterwards at the Diplomat pub, Badersfield. This is appropriately the last building he worked on when in public service when it was built as a centre for the service wives during the first Gulf War. Family flowers only please with donations in William’s name to the East Anglian Air Ambulance. 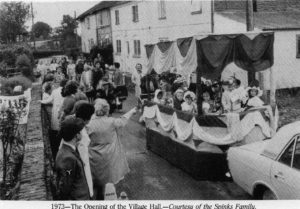 This entry was posted in Brampton Blog, News and tagged Funeral, Obituary, Parish Council, Village Hall, William Spinks. Bookmark the permalink.
This website uses cookies to improve your experience. We'll assume you're ok with this, but you can opt-out if you wish.Accept Reject Read More
Privacy & Cookies Policy

This website uses cookies to improve your experience while you navigate through the website. Out of these, the cookies that are categorized as necessary are stored on your browser as they are essential for the working of basic functionalities of the website. We also use third-party cookies that help us analyze and understand how you use this website. These cookies will be stored in your browser only with your consent. You also have the option to opt-out of these cookies. But opting out of some of these cookies may affect your browsing experience.
Necessary Always Enabled
Necessary cookies are absolutely essential for the website to function properly. This category only includes cookies that ensures basic functionalities and security features of the website. These cookies do not store any personal information.
Non-necessary
Any cookies that may not be particularly necessary for the website to function and is used specifically to collect user personal data via analytics, ads, other embedded contents are termed as non-necessary cookies. It is mandatory to procure user consent prior to running these cookies on your website.
SAVE & ACCEPT