Celebrate the Aylsham Navigation in August

August 26th 2012 is the 100th anniversary of the Aylsham Navigations closure due to a massive flood which occured on that date in 1912. The Navigation was on the Bure and there were locks at Horstead, Buxton, Oxnead, Burgh and Aylsham (Burgh Hall). Up to that time coal and other consumables were brought to Brampton by wherry and the local agricultural produce and bricks were taken in the opposite direction. There was actually a large brickworks in the field opposite what is now Brampton Common. The remains of Oxnead lock can clearly be seen as can the staithe by the mill where the wherries tied up to be loaded.

On the 26th August there will be a carriage of a token cargo in canoes down the Navigation from Aylsham to Coltishall where it will meet the only surviving trading wherry, The Albion. That will be moored on Coltishall Common where there will be a celebratory extravaganza with games, exhibitions, stalls and entertainment. Car parking can be had in Coltishall or at Roys overspill car park in Wroxham from where an historic old bus will run a shuttle service. You would be very welcome there and you could even travel by the Bure Valley Railway and then old bus from Wroxham if you didn’t want to drive. Nearer the time we will be publicising details of when the canoes will transit Brampton and Oxnead so you could cheer them on.

This event is being organised by the Bure Navigation Conservation Trust and more details can be found here. BNCT also have for sale at a reasonable price of £7.99 a two DVD set entitled a “Wherry for Aylsham” – the website has details of how to obtain this. A membership application can be found here -: Membership-Application-and-Flyer1 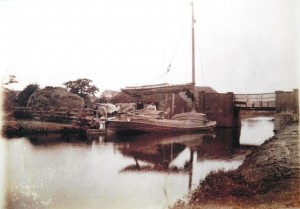 A wherry waits at Burgh Staithe 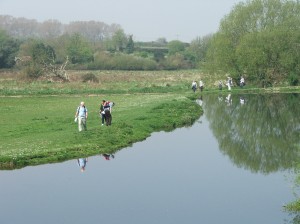