I drive past the ghost of a garden every week day. To the left of the Buxton Road just before the bridge, an apple tree clings on to existence on an old hedge line. This is the only mark which remains of a dwelling or smallholding. Upon checking the old maps of the area, the site was clearly occupied as a smallholding when the tithe map of 1837 was produced. By 1885, when the surveyors of the Ordnance Survey were gathering their records, the smallholding seems to have had a dwelling added to it. The map shows a typical part cottage / part barn of the type that you can still detect in some of the older village houses. 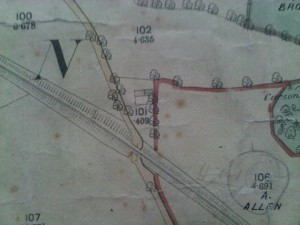 Buxton Road – land near the bridge: the old smallholding

It was only marginally affected by the arrival of the railway line in the 1880’s, although the upheaval must have been enormous. Did the cottage become abandoned then or much later?

By 1946 an aerial photo was taken covering the Parish and the enlarged image, although slightly blurred, appears to show the area being cultivated like an allotment. Perhaps by then the house had been abandoned but the separate smallholding continued. 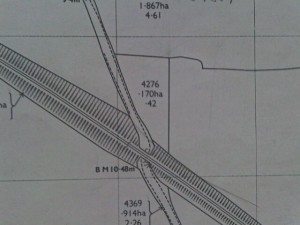 Today the latest plans show the shape of the field boundary and only the apple tree remains to mark the spot. No doubt someone in the village knows the history. I would be pleased to know.

This entry was posted in Brampton Blog and tagged 2010, 2011, Brampton history. Bookmark the permalink.